After a spot of lunch at the Port Charlotte Hotel, we made our way to the Bruichladdich Distillery. Visiting Bruichladdich was the highlight of my trip to Islay, as we enjoyed seeing the distillery in all its glory and meeting the people behind the scenes.

Ever since I joined Vine & Table several years ago, I have watched this distillery resurrect itself after near permanent closure and become an innovator among Scotland’s numerous distilleries. Bruichladdich produces whiskies with real class and distinction. They produce a lot of different styles that range from light and fragrant to meaty sherry, port and rum cask whiskies to the heaviest, peatiest whisky ever produced: the Octomore!

We were welcomed by Simon Coughlin, Owner/Operations Director, who many of you will remember meeting at last year’s Whisky & Fine Spirits Expo. It was a Tuesday afternoon and the whole place was buzzing, an absolute hive of activity. The distillery, both inside and out, was in the midst of a thorough spring cleaning and getting a lick of paint to be ready for the hordes who would descend a week later for the Islay Festival. Unfortunately for us this meant that we would not see any distilling taking place!

We were taken around and shown the inner workings of the distillery by Mary, a most gracious tour guide and absolute wealth of knowledge. She is the third generation of her family to work at the distillery.

The distillery is a big employer on this small island, with over 60 people in employment. Whisky at Bruichladdich is still produced the traditional way, slowly and steadily, meaning that many hands are needed to produce every single bottle. This is in stark contrast to the bigger, more mechanized distilleries such as Lagavulin, Laphroaig and Caol Ila, where banks of computers dictate the processes and distillery workers are few and far between.

The one thing that we noted on our walk around was that everybody had a good word to say to each other and to us. Everybody was happy (it could have been the angel’s share in the atmosphere) and the craic was great with everybody we met.

Unlike Kilchoman where everything was gleaming new, Bruichladdich was entirely the opposite. This is a distillery that is sort of stuck in a time warp. The buildings are ancient, with much of the machinery dating back to 1881 when the distillery was founded. What is even more amazing is that much of it is still working! The mill pictured below (it is referred to as the Boby mill), despite being well over 100 years old, can still do the work that it was intended for. It grinds the different barley strains to achieve different levels of coarseness at the pull of a lever (no buttons here!). 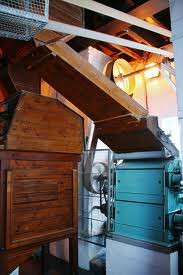 The massive cast iron, open-topped mashtun is also original and is the biggest one of its kind in all of Scotland.

The oldest working still in Scotland at just over 130 years old!

We walked into the still room to a view of gleaming stills and spirit safes. My heart gave a skip when I saw the love of my life perched meekly in the corner: Ugly Betty. As stills go she is not the prettiest I have ever seen, but it was wonderful to see the pot that produces the best gin that I have ever tasted. The Botanist Islay Dry Gin  is produced right here using the only Lomand still in operation in Scotland. This gin is especially unique in that twenty two of its 31 botanicals are harvested on Islay.

Our official photographer took this most interesting shot of the inside of the still. She had to do this by leaning in backwards without falling or dropping the camera! This is the view you get looking up inside Betty. You can see the numerous copper pipes and plates where the vapors rise before reaching the neck. The little steel bucket attached to the lyne arm (see below) is where the more delicate botanicals are placed. The vapor rises and then comes into contact with the botanicals before condensing back into liquid form.

After saying farewell to Betty we made our way through the bottling hall and into the old warehouses where we were met by General Manager Duncan MacGillivary. Duncan was clearly in his element as we snaked our way through the damp, musty building. The man was practically dancing as he selected whiskies for us to taste. His passion and excitement was rubbing off on me and the rest of the group: this was going to be a lot of fun.

Many of the casks we tasted from were on the older side, with all of them coming from the time before the distillery shut down in 1994. First off was a Scotch that was patiently resting in a calvados cask. That dram will live as one of the most memorable whiskies that I have ever tasted. It was dense, creamy and perfectly mouth filling with rich layers of stewed apple, vanilla and oak. Who knows what the proof was, but it didn’t matter, it was drinking perfectly without a drop of water, which should give an indication of its ripe old age. I asked if I could purchase the cask then and there, but unfortunately Bruichladdich no longer offers single cask bottling for customers.

From there we went on to taste a multitude of casks, from big sherry bombs to more delicate Bordeaux cask finishes and from stately chateaus such as Lafite Rothschild, Petrus and Duncan’s own personal favorite, a 34 year old Chateau D’Yquem. Vanilla, citrus and buttered toast wafted from the glass. This was heaven and a once in a lifetime opportunity.

Unfortunately all parties must come to an end. I could have stayed in that warehouse all day until I was found the following morning!

Next stop will be to the south of the island as we go in search of the elusive Ardbeggians!!